Boroughs
Boroughs Stay informed
Ensemble Montréal is not just thinking about a short-term vision over four years; we are working for the next generations. Starting now, let's build the city we want in 25 years, for 2045. The realization of major projects, legacies for future generations, must begin in the next mandate. Some of these projects may take more than a decade to complete. These projects are designed to improve the quality of life of Montrealers, for example by facilitating mobility and by beautifying the living environment in order to keep families. Moreover, these are world-class projects that will attract even more tourists from around the world.

Transfer of jurisdiction over school buildings to municipalities

In order for development planning to anticipate the need for schools and not forget that they are part of the equation for families, Ensemble Montréal is convinced that jurisdiction over school buildings must be transferred to the City of Montreal. Too often, the multiplication of actors delays or prevents negotiations.

Furthermore, schools have libraries, sports facilities or courses that can be used by a larger number of people, what is called the collaborative economy, but at the moment, the overlapping of levels does not allow for their optimal use. The city already manages the library and sports and recreation activities on its territory, so it would make perfect sense to transfer the use of these school facilities to the city.

The Coderre-Gelly administration will ask the Quebec government to transfer authority over school buildings to the city.

Cité-du-Havre: a new neighbourhood for a 21st century metropolis

We propose to transform the Montreal experience with the creation of a new neighbourhood with unparalleled potential: the Cité-du-Havre neighbourhood. 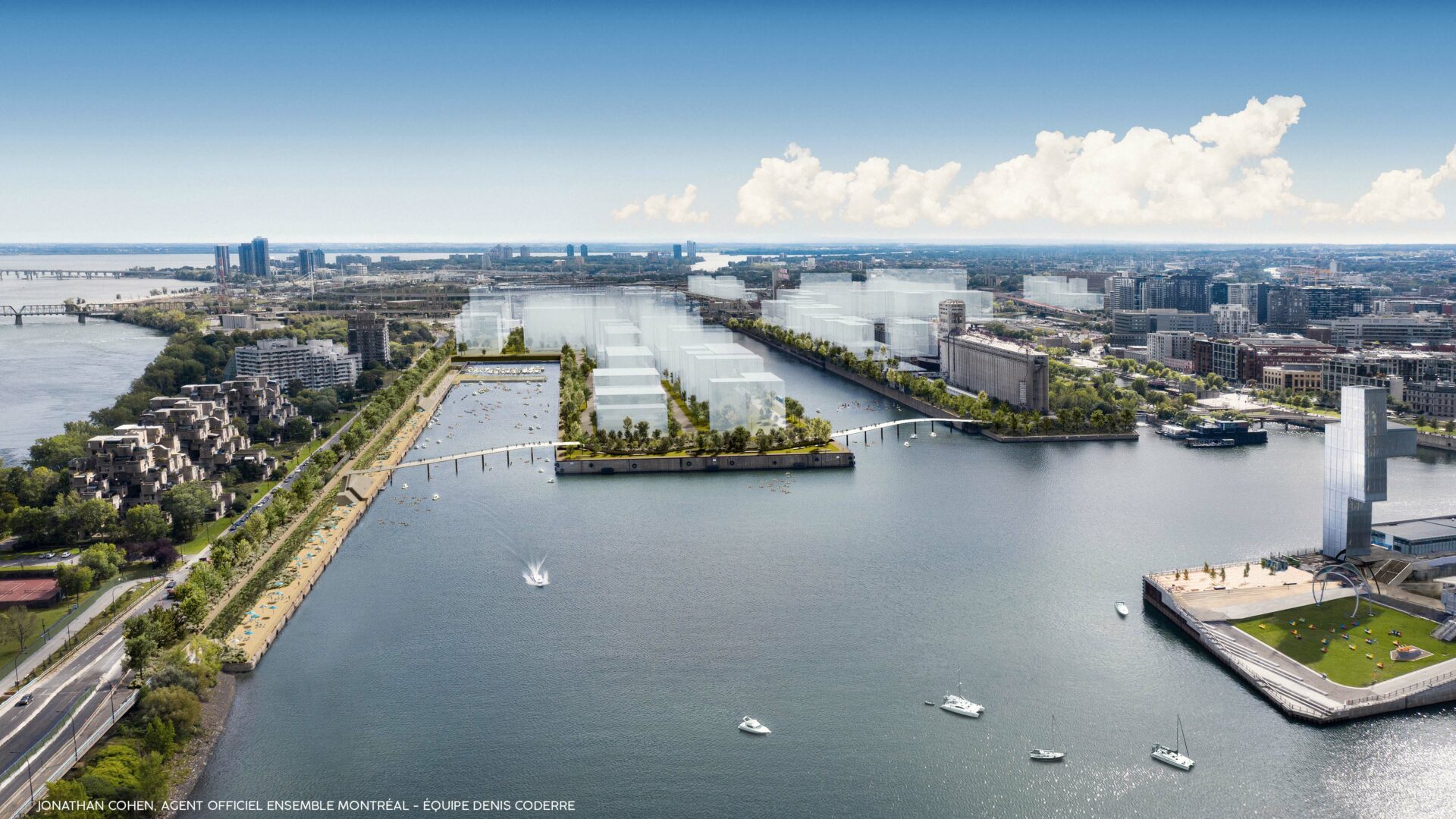 We propose to replace this urban scar that cuts the city and its neighbourhoods in half with parks, services for residents, and sports facilities, covering the trench. The service roads will be reduced from three to two lanes in both directions to make the street safer for pedestrians. The first will be between Queen Mary Road and Cote St. Catherine Road. The overlay will provide new green space for residents including outdoor sports facilities, family facilities, and also a recreation area and fountain. While this overlay will necessarily take a long time, Ensemble Montréal, in its first mandate, will conduct a feasibility study and then have the project added to the Plan québécois des infrastructures. A citizen consultation will be conducted via the Office de consultation publique de Montréal (OCPM) so that citizens can improve the project and make it their own, and a signature urban design contest will be set up so that the project stands out as the “diversity feature” of Montreal.

We propose to reconnect Old Montreal to the rest of the city with a signature development. This project includes the expansion of the Palais des congrès and the Place des Montréalaises over the highway to create the largest public square in Montreal. A design competition will be held to ensure that the aesthetics of this new place will be seen internationally. We will have the overlay of the Ville-Marie Expressway included in the Plan québécois des infrastructures (PQI) and offer Montrealers a brand new emblematic project that will contribute to the dynamism of the downtown.

Notre-Dame-en-Hauteur: a suspended line at the gateway to Old Montreal 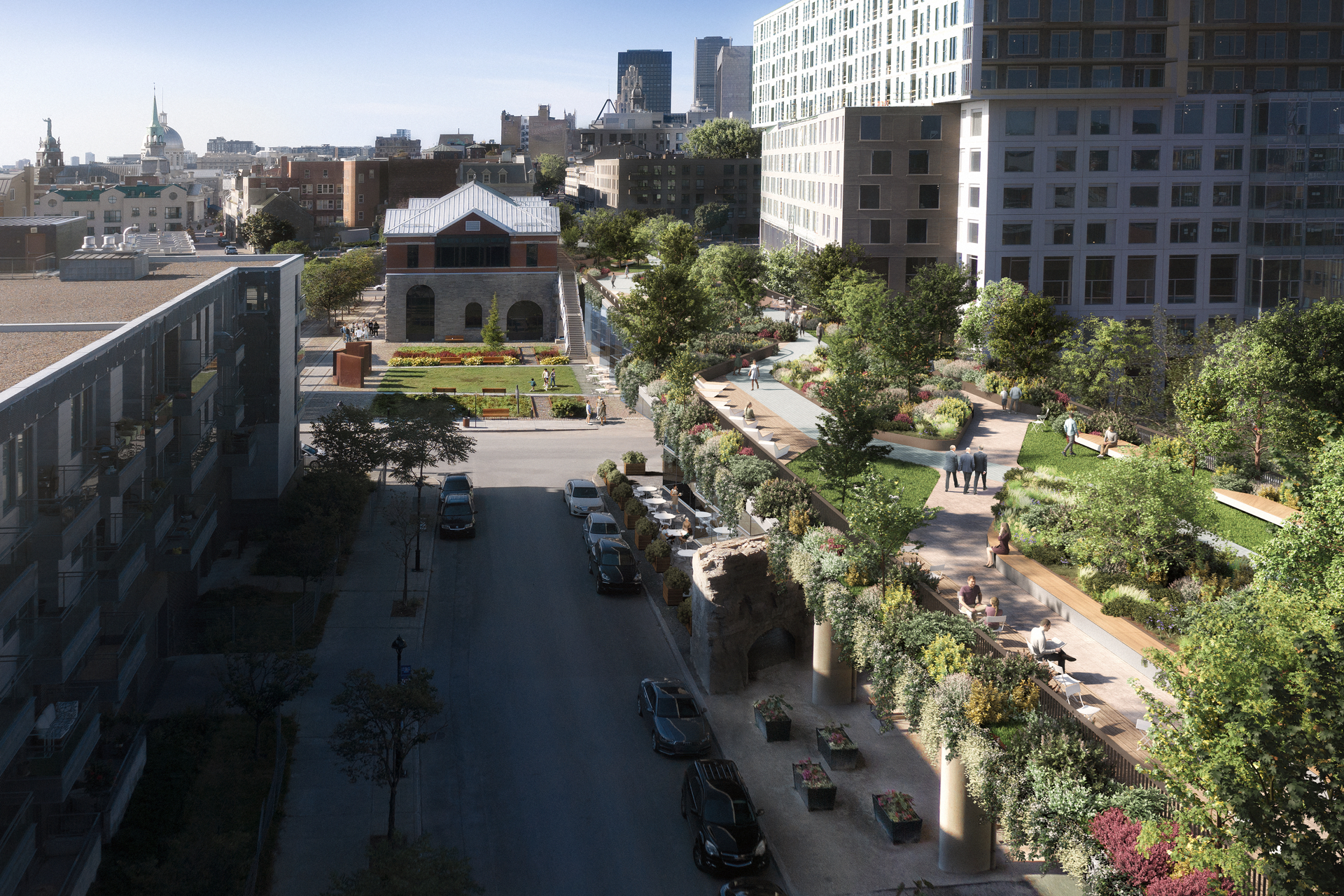 We propose the pedestrianization and greening of the Notre-Dame viaduct between Berri and Montcalm streets through the creation of a suspended linear park of nearly half a kilometer, similar to the High Line in New York and the Viaduc des Arts in Paris. A portion of the undeveloped underside of the viaduct could be used for artists’ studios, co-working spaces, cafés, startup incubators, etc. This new destination will connect the new Faubourgs district to Old Montreal.

Within the first 100 days of a mandate from Ensemble Montréal, a call for projects will be launched for the development of the new Hippodrome district, which will include 6,000 new housing units, the majority of which will be family-owned, with a good portion being affordable and social.

The winning consortium will have to complete the project quickly and start construction as soon as possible. The agreement signed with the Quebec government stipulates that work must begin before 2023.

This new district will have to be designed to attract many young families by creating an adequate living environment and the necessary infrastructures. Ensemble Montréal makes the retention of young families in Montreal one of its main priorities.